From Imperial Museum to Communication Centre? On the New Role of the Museum as Interface between Science and non-Western Societies

Interdisciplinary Tandem Project, granted by the VolkswagenStiftung [Volkswagen Foundation] (duration: from November 2006 up to October 2009) 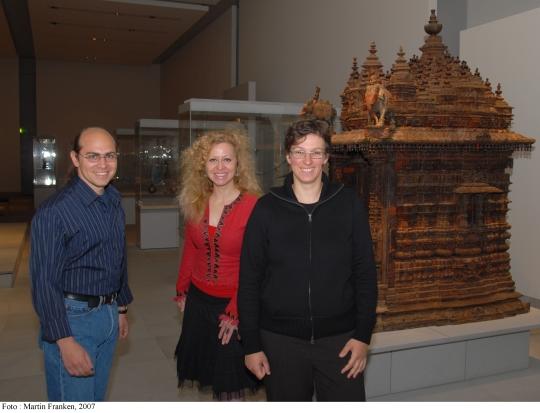 This project deals with the new role of museums in non-Western cultures. We assume that globalisation has enormously enhanced the artistic and cultural expressions of non-Western societies in the direction of "retraditionalisation".

The aim of our analysis is to gain insights into the future of museums: it focuses on culturally political features of globalisation in different regional contexts and on its effects for the pillars of museological activity: Collecting, Research and Mediation.

In this perspective we look at three non-Western world regions: Lidia Guzy is studying museums in India and the archiving of endangered musical expressions there. Rainer Hatoum concentrates on the changes in museum work in North America on the basis of the growing role of native Indian cultures. Susan Kamel is tracing the changes in museums with respect to the marked national reactions to globalisation in Cairo.

On a conference (24.09.-26.09.2009) the results of the project was discussed with scientists and museum professionals from all over the world. Lidia Guzy (India), Rainer Hatoum (North America) and Susan Kamel (Egypt) chose three museums as a model for global and national trends: the Museum of Mankind in Bhopal, the National Museum of the American Indian in Washington D.C., and the Nubia Museum in Aswan. » read more

Publication: Museumsinseln | Museumsislands, Lidia Guzy, Rainer Hatoum and Susan Kamel (Editors), photos by Patrik Metzger, deutsch | englisch, Panama Verlag.
Museums have long been the place of presenting the Own and the Other. Yet that which is understood by own and other is increasingly contested. Now marginalised groups demand a part in the representation of their cultural heritage as well. This demand is joined by criticism of the established, markedly Western forms of scholarship, collecting practices and strategies of mediation. The examples from North America, India and Egypt that are presented here show how museums are like islands, that mediate local contexts and global discourses. » published by Panama Verlag

Publication: From Imperial Museum to Communication Center - On the New Role of Museums as Mediators between Science and Non-Western Societies, Lidia Guzy, Rainer Hatoum and Susan Kamel (Editors), Königshausen und Neumann.
Are museums symbols of cultural dominance or spaces of social inclusion? The project ´From Imperial Museum to Communication Centre? On the New Role of Museums as a Mediator between Science and Non-Western Societies´ explores alternative non-European museum concepts. The editors of this volume, Lidia Guzy, Rainer Hatoum and Susan Kamel, conducted research in India, North America and Egypt, investigating different contexts of a major global shift in museum theory and practise. Marginalised groups demand a more active part in the representation and interpretation of their own cultural heritage. In consequence, Western forms of scholarship, collecting practices and strategies of mediation are called into question. Presenting the results of an international conference which brought together museum professionals from the regions of the editors´ research and from Berlin, the present volume offers a compendium of contemporary perspectives on museum work.