Excavation project within the framework of the American Excavations at Morgantina

This is a project undertaken within the framework of the American Excavations at Morgantina (AEM) in Sicily, currently co-directed by Malcolm Bell III and Carla Antonaccio. The project is co-directed by Sandra K. Lucore and Monika Trümper. Since 1955 the AEM has uncovered extensive areas of the Prehistoric and Archaic settlement (Cittadella Hill) as well as of the Classical and Hellenistic city (Serra Orlando Plateau). The project, planned for three years (2013-2015), entails full excavation of a public bath building (South Baths) and an adjacent sanctuary complex (West Sanctuary of Demeter and Kore), which are located in the western part of the Hellenistic city (Contrada Agnese) and were only partially excavated in 1971. The broader aim of the project is to better understand the urban development of an exceptional quarter at the western edge of the built city, which may have served for specific (“entertainment-leisure”?) purposes; to fully assess the history, design, and function of both buildings and their relationship to each other; and, beyond Morgantina, to provide a significant contribution to the long neglected investigation of Greek public baths as well as to the study of the sacred topography and religious life of Hellenistic cities.

The American excavations focused largely on the center of the city on the Serra Orlando Plateau, revealing an impressively large Agora with civic, commercial, and sacred buildings and adjacent residential quarters. While the Serra Orlando Plateau had been settled from the mid-5th century BC onward by a mixed population of Greeks and indigenous Sikels, who established an orthogonal grid plan, most of the archaeological remains date to the most flourishing period of the city in the 3rd century BC. After the Romans had sacked Morgantina in 211 BC and given it to Spanish mercenaries, the city slowly declined and was finally abandoned in the 1st century AD. Because of the extent and nature of the excavated remains, Morgantina ranks among the most important Hellenistic cities throughout the Mediterranean (fig. 1). This was confirmed once more when, in 2003, focus of the excavations shifted from the center to the western periphery of the city, to the area called Contrada Agnese, which had only partially been explored in 1971. Located in a valley, Contrada Agnese includes an area of c. 120 m NS by 50 m EW that is fenced as part of the archaeological park and is located c. 300 m east of the western city gate. Within this quarter, the following buildings had been excavated before the 2013 season: the North Baths (completely excavated, under direction of Sandra Lucore 2003-2011), currently the most important known public bath in the Greek world; and several partially excavated structures, including a large (public?) building (Southeast Building), a second public bath (South Baths), an adjacent sanctuary (West Sanctuary of Demeter and Kore), and sections of the street network (fig. 2). 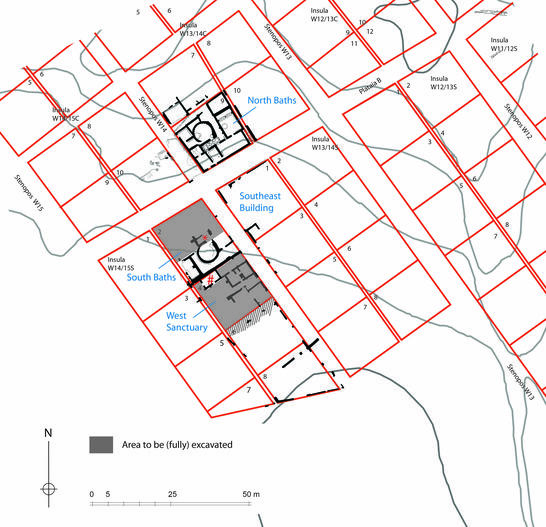 The two Morgantina baths belong to a corpus of 71 currently known Greek public baths throughout the entire Mediterranean, almost none of which have been fully excavated, investigated, and published. Thus, crucial aspects of Greek baths, such as the chronology and development, the technology and functioning (esp. water management and heating systems), and the urban and socio-cultural context can rarely be completely assessed. While several sites in the Mediterranean provide evidence of more than one Greek public bath, these buildings are always evenly distributed throughout the city, and are never located in close proximity to each other as in Contrada Agnese. Furthermore, Greek public baths are found in the periphery of large extraurban sanctuaries, such as the sanctuary of Zeus at Olympia, and in the vicinity of intraurban sanctuaries, but never immediately adjacent to and thus potentially intricately linked to a sanctuary, as in Contrada Agnese. The function of these “sanctuary-baths” and their potential use for ritual-purifying-therapeutic purposes remains much debated.

Finally, although the Morgantina excavations have uncovered one of the most significant series of sanctuaries dedicated to Demeter and Kore in the Greek world—with six examples inside and two outside the walls of the Hellenistic city—none of these eight sanctuaries has been fully explored and published thus far. Therefore, the development of the sacred topography as well as the function and integration of sanctuaries into the urban landscape and life cannot be comprehensively assessed.

Significance and Objectives of Proposed Work

The project has four major objectives in exploring the unique situation in Contrada Agnese:

The Project is generously funded by the following institutions and foundations: