Astrology, Astronomy, Mathematics, Religion and Philosophy – all these different aspects and their theories and practices, texts and images, meet in the concept of the zodiac. 2500 years ago, in the 5th century BCE, the introduction of the zodiac in Babylonia marked a turning point in human culture and science. The zodiacal turn was accompanied by a mathematical turn in the astral sciences and a personal turn in astrology. From Babylonia, zodiacal astral science spread to Egypt, the Greco-Roman world, and beyond. 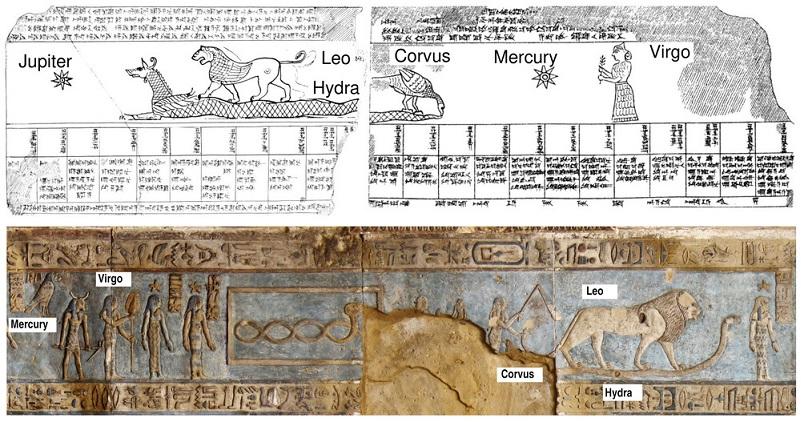 Lower: Rectangular zodiac situated on the ceiling of the hypostyle hall of the Hathor Temple in Dendara, Egypt (Roman period). The illustration shows the nocturnal hours (12 to 10) as goddesses wearing stars on their heads. Reading from right to left: After the 12th hour, Leo is depicted as standing on Hydra in the form of a snake. Close to the lion’s tail Corvus is depicted, followed by Coma Berenices shown as a goddess holding a flail. After the 10th hour, there is Virgo holding an ear of wheat. The last figure is a falcon representing Mercury (EAT III, 80 and pl. 42). © graphics/montage: M. Ossendrijver, 2021.

The ZODIAC project led by Principal Investigator Mathieu Ossendrijver is funded by a European Research Council Advanced Grant (2021–2026) and hosted at the Institute for the History of Knowledge in the Ancient World at Freie Universität Berlin. ZODIAC’s interdisciplinary approach conceives astral science as interconnected astronomical, astrological, mathematical, religious and social practices.

This research endeavour develops a new account of the emergence, spread and cross-cultural transformations of zodiacal astral science. ZODIAC is the first in-depth, comprehensive study addressing both textual and iconographic sources from different ancient cultures to reveal the strategies that fostered broad acceptance in numerous new contexts: How can we explain the global spread of the cross-cultural phenomenon of the zodiac?

The ZODIAC team and their academic partners have set out to find the answers.

Imagining the Sky: The Zodiac and Related Astral Imagery in the Ancient World

The project Zodiac: Ancient Astral Science in Transformation (ERC) at the Institute for the History of Knowledge of the Ancient World, Freie Universität Berlin, is hosting a workshop on 21–23 September 2022: Imagining the Sky: The Zodiac and Related Astral Imagery in the Ancient World