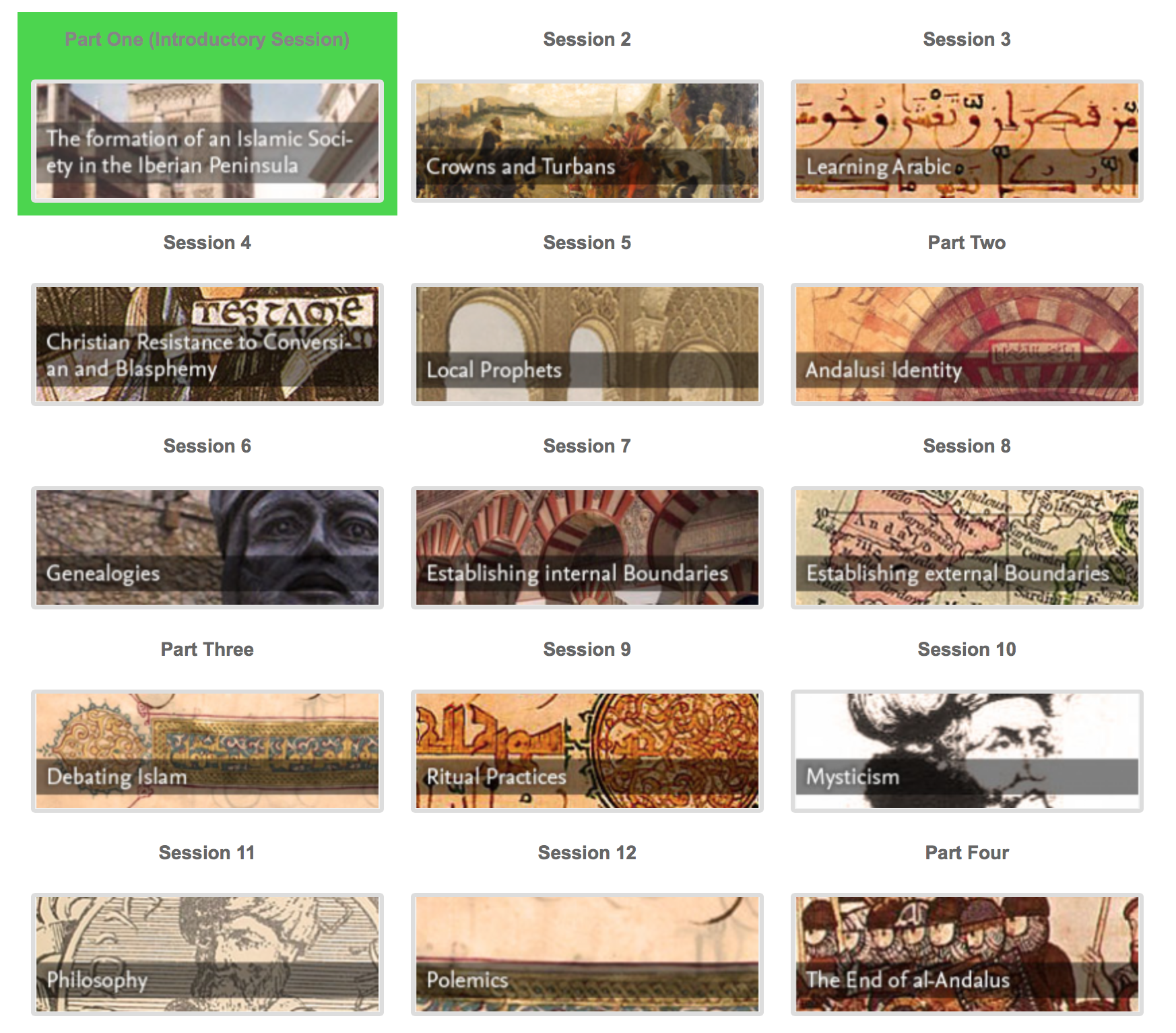 Screenshot of the structure of our learning management system

This course will provide an introduction into the material legacy and aesthetic practices of Muslim majority societies in North Africa, the Middle East, Central Asia and the Indian Subcontinent from late antiquity to the modern period. The backbone of the course will be an exploration of the artistic legacy following four major periods (Late Antiquity, the Middle, Early Modern and Modern Periods) and will familiarize students with the most important dynasties and centres of artistic cultural production. In addition, we will discuss topics and consider notions and processes of cultural production as well as their relevance today in museums and cultural life.

The History of Art and Architecture of Muslim Societies

Themes of Art and Material Culture of Muslim Societies

B. Junod, G. Khalil, S. Weber, G. Wolf (eds.): Islamic Art and the Museum - Approaches to Art and Archaeology of the Muslim World in the Twenty-First Century, London (2013)

An Introduction to Islamic Theology will trace the history of Islamic theology from its origins to the present day; beginning with selected interpretations of key Qur’anic passages, it will cover the earliest theological movements with attention to specific issues, such as free will, diviine attributes, the nature of the Qur’an and the creation of the world. Both Sunni and Shi’i systems of thought will be discussed. Readings of classical Arabic theological texts will be included. The course will follow theological developments up to the modern period with consideration of some contemporary reform theologians and their predecessors.

Ronny Vollandt: Books and their Jewish, Christian and Muslim Readers

The course will combine two, already intrinsically connected, fields of research: intellectual history and the history of the book. Jewish, Christian and Muslim communities in the Near East from medieval to early-modern times were exceedingly bookish and much of what the intellectual historian of this region knows comes from the books and the documents that these communities left behind. Taking a comparative approach, the aim of this course is survey how particular bodies of knowledge turned into texts in books (often within an oral context), how these texts formed a hierarchy (seemingly the Hebrew/Christian Bible and Quran at the center), and how a set of textual practices (recitation, commentaries, translations) emerged.
We will try to also understand how these books were produced in a very concrete material way (writing materials, different forms of books), how they were stored (libraries) and, eventually, how they were discarded (Genizahs) when not used any longer.

In this course, we will familiarize ourselves with different aspects of the history of science in Islamicate societies:

We will trace some of the major historiographical debates and their concepts since the 19th century such as innovation, achievement, translation movement, decline, science in the service of Islam, or marginalization.

We will compare different types of textual, pictorial, instrumental, and other material products used in the mathematical sciences, map making, geography, medicine and perhaps other fields of knowledge from different historical periods and regions. We will compare their formal and intellectual properties and try to determine major scholarly practices such argumentation, demonstration, exemplification, or organization of knowledge. On the basis of secondary sources, we will survey the content of some of the fields of knowledge.

We will read a few extracts from historical sources about scholars and their training and position in society and analyze a few types of narrating scholarly lives and goals in the sciences. We will study literature on the classification of the sciences from different centuries and regions and discuss their similarities and differences.

At the end of the course, we return to one of the central historiographical questions since the 1970s - presence or absences of the sciences from the institutions of knowledge in various Islamicate societies. We will read influential secondary texts on this issue, pay attention to some art historical investigations, and analyze properties of those institutions on the basis of different primary sources.

A.I. Sabra, "The Appropriation and Subsequent Naturalization of Greek Science in Medieval Islam." History of Science 25, 1987, 223–43.