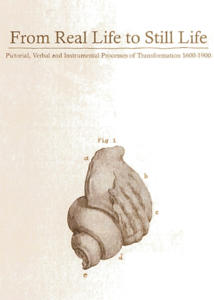 It is generally acknowledged among scholars that representations of natural objects – whether pictorial, graphic or verbal, and whether executed with or without the help of instruments – do not merely illustrate knowledge. Particularly, representations of lifeless objects of nature, such as in the artistic genre of the still life, but also in diagrams, schematic models or literary descriptions – are in fact recognized to have more complex contents.

Historians of science consider these representations in terms of their capacity to convey to the beholder the experience and the results of scientific observation. In art history, such images have been investigated with particular attention to their symbolic and iconological, semiotic and hermeneutic contents.

In both cases, emphasis has thus been put on the representations themselves as the final products of observation. Generally neglected as a specific category to be studied, however, are the processes that generate these representations – that transform, as it were, the pulsating, ‘real’ life into a crystallized, motionless universe of its own, into ‘still lives’ able to transport knowledge and to modify or even condition the perception and comprehension of natural objects.

The conference focuses therefore on these processes of transformation and aims at exploring their nature and epistemological significance in an expanded frame, which should bring together the problems of both artistic and scientific representation.

The leading questions are the following:

The conference aims at a comparative approach embracing the empirical inclination of the 17th and 18th centuries, the Romantic disposition of the early 19th century, and the later positivistic orientation. In these periods, the emergence of empirical approaches to the objects of nature and the meaning of natural objects as miraculous appearances with magic power were central phenomena in both the arts and the sciences; both had powerful and manifold consequences for the processes of representation.

Focussing on the figurative, textual and instrumental processes of representation of natural objects we expect to eventually add to the controversial discussion of the concept of a cultural ‘watershed period around 1800’, and thus contribute to reach a more fine-grained picture of the relationship between the modern and the early-modern eras.